on all the WORLDWIDE RADIO STATIONS recently. I am touched and humbled...

Special thanks to Chris Spierer for help along my journey.

I am so grateful for this as I have only ever wanted to touch folks with my lyrics&music, especially my lyrics.

Thank you to all the amazing DJs who play my songs. What an honor.

I have just won 4 more GOLD and 4 more PLATINUM AWARDS for my songs and for writing:

THERE BUT FOR THE GRACE OF GOD (GO I)

IF I TURN OFF THE RED LIGHT (WILL YOU TURN YELLOW)

YOU ARE MY ANCHOR

and another for writer on:

I am beyond grateful. Thank you so much!!!!

Once again, I'm so grateful for this recognition!

Thank you so much. This means the world to me!!!

My Daddy's Spirit Sails With Me... 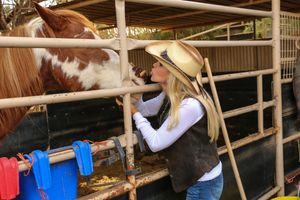 Jackie has traveled the world and has established herself as a performing singer-songwriter. She has, in fact, been recognized as one of “Country Music’s most relevant female artists of all time, according to “Country Start Page.” She is included with all the female Country artists she has admired her entire life, some of the greatest female Country artists of all time, on the “Country Roads Fan Site.”

Jackie’s songs have charted worldwide alongside such greats as Johnny Cash, Dolly Parton and many others. Her song “You Are My Anchor” reached the top of the charts in Europe and #1 in Holland.

Her greatest joy, however, is her charitable work with organizations like The Nathan Adelson Hospice and the American Cancer Society. Reverend Judy Andrews, at the time head of both Nathan Adelson and Creekside Hospices, in Las Vegas, after hearing Jackie's spiritual songs, was affected so deeply, she ordained Jackie a Chaplain. Jackie until recently has been hesitant to claim this title, but feels Reverend Andrews did not ordain her a Chaplain as a frivolous gesture and it deserves gratitude and a certain amount of respect and responsibility.  The Reverend then asked her to write a theme song for the selfless volunteers of hospice. She wrote a song called “Into the Light”. This song was heard by Palliative care organizations visiting from Washington, D.C. and spread to Hospices throughout the Country. Members of the American Cancer Society also heard the song and asked if they could open their charity season with it many years ago, along with their candlelight on the hill service. "The Las Vegas, Nevada Chamber of Commerce Certificate for outstanding contributions as a citizen" was awarded to "Chaplain Jackie Carlyle", and she couldn't have been more proud. In honor of Reverend Andrews Jackie has written new spiritual songs and will soon record them after her upcoming CD is completed.

Another source of pride is her song “Souls In The Breeze” about the Jewish people and the building of their homeland, Israel. This song is on the Jewish Agency for Israel website where people from all over the world must go to learn how to become citizens of Israel. She has received emails from new Israeli citizens who immigrated to Israel and have expressed their appreciation for her words and music.

Israel has also placed her on Maven search, the Jewish search engine akin to Google.

She was also asked to write the theme song for the now deceased Indian Yoga Master and leader of the Sikh religion for the western hemisphere, Yogi Bhajan, “The Lion Walks With Me”. Jackie performed this song for him at the 1997 Annual Peace Prayer day celebration in Santa Fe, New Mexico, where dignitaries including, then Governor Bill Richardson, along with Yoga masters and gurus from around the world attended.

Her poetry has been published in Southern Nevada Equestrian magazine, as she is also an accomplished horsewoman.

Jackie lives in Las Vegas, Nevada with her two dogs, Monkey and Belle and her amazing red and white paint horse named Maverick, (whose pictures can be found throughout her website.) He's packed with personality and she adores him. She calls him her "Main Man."

Jackie is also a two time Cancer Survivor, recently surviving colon cancer. She prays for all victims of this horrible disease and hopes that you fill your life with joy and happiness in the face of it and surround yourself with loving supportive people. Fighting cancer takes "light". The light of God, your inner light and the light of good, loving people around you. God bless you.